Sometimes, you just have to wing it, and you end up nailing it. From Willy Wonka’s entrance in the movie “Willy Wonka and the Chocolate Factory” (1971) to the scene in “The 40-Year-Old Virgin” (2005) where Steve Carell curses while getting his chest waxed, there many moments of pure improvisation in famous movies. I’m sure that all the screenwriters did an amazing job, but actors are in the spotlight, and sometimes they improvise things that were never a part of the script. Sometimes, those scenes become the most memorable parts of the movie or sentences we all remember the movies by. Maybe we should all learn to occasionally just go with the flow and see what happens because the most memorable moments in life are those that weren’t planned to happen. The same goes for movies and these 10 moments of pure improvisation in famous movies prove that being spontaneous pays off.

What’s a better way to start than by mentioning the man who knows how to make an entrance. The enigmatic and weird Willy Wonka lets us know that he’s an eccentric person before even saying a word. He is played by Gene Wilder, who suggested that Willy Wonka makes an entrance by walking with the help of a cane, just to drop it and show that he was only pretending to need it. 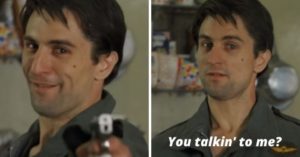 Believe it or not, but the original screenplay for Taxi Driver didn’t include Robert de Niro’s famous speech in front of the mirror. The script actually just said “Travis talks to himself in the mirror” and Martin Scorsese gave Robert de Niro the freedom to improvise this scene, and so the legendary “You talkin’ to me?” monologue came to life and became a tough guy catchphrase. This is one of the most memorable moments of pure improvisation in famous movies that no one saw coming.

You might not remember The Tonight Show starring Johnny Carson, but you do know about its classic opening line. Don’t believe me? Ever watched the film adaptation of Stephen King’s book “The Shinning”? Well, the famous “Here’s Johnny!” line was improvised by Jack Nicholson, and he got the idea from the earlier mentioned show. Interestingly enough, director Stanley Kubrick wasn’t familiar with The Tonight Show since he was living in England, so he didn’t get the reference, but Nicholson convinced him that it should stay in the movie. Good thing he did because it became one of the most iconic moments in movie history. 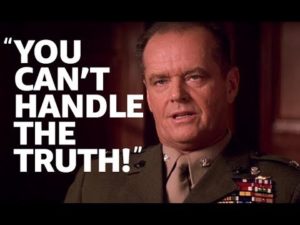 Another classic line improvised by Jack Nicholson happened during the climax of the movie “A Few Good Men” when a lawyer demands to hear the truth. The response that was planned for this scene was “You already have the truth” but it seemed tame to Jack Nicholson, and he went with an angry rant instead. Who doesn’t know about the famous “You want the truth? You can’t handle the truth!” line from this movie? Maybe you didn’t know that it was one of the moments of pure improvisation in famous movies though.

There’s a scene in “Pretty Woman” where Richard Gere is supposed to give a fancy necklace to Julia Roberts. He decided to prank her and quickly closed the box while she was trying to take the necklace, so it caught her fingers. She was genuinely surprised, and her laughter was so charming that the director decided to leave this moment in the movie.

“I didn’t know you could read.” – Harry Potter and the Chamber of Secrets

Remember when Harry and Ron used a potion to turn into Crabbe and Goyle, Draco Malfoy’s friends? When the potion started wearing off, Goyle started turning into Harry again, and we see him wearing Harry’s glasses. Draco instantly notices this, and Harry explains he uses them for reading. Draco hisses and says “I didn’t know you could read.” This hilarious response was actually improvised on the spot because Tom Felton who plays Draco forgot his line. It sounded cruel but funny, and it perfectly suited the character, so director Chris Columbus decided to keep the scene.

The most annoying sound in the world – Dumb and Dumber

A lot of scenes in “Dumb and Dumber” were improvised, and since Jim Carry started his career as a comedian, it’s no surprise that he did comedy on the spot even during the filming of a movie. One of the moments of pure improvisations in famous movies is the most annoying sound in the world. In the scene with the hitman, Harry and Lloyd were supposed to get on his nerves by fighting about jelly beans. Jim Carrey and Jeff Daniels thought that they could do something funnier, so the “Wanna hear the most annoying sound in the world?” line eventually happened. 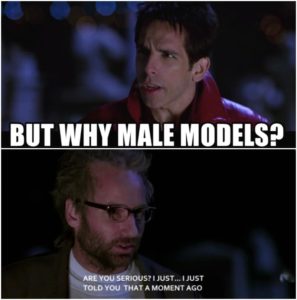 “But why male models?” – Zoolander

Sometimes, moments of pure improvisation in famous movies fit the story of the movie so well that it’s unbelievable that they weren’t planned to happen. One of such moments is in the “Zoolander” movie when Ben Stiller says “But why male models?” after a long explanation on why male models are perfect for assassinating world leaders. His character Derek Zoolander just looked even dumber and funnier, which, unlike his response, was part of the plan.

Interestingly enough, the famous “You’re going to need a bigger boat” line from the movie “Jaws” became an internal joke among the crew and the cast during filming because Roy Scheider kept repeating it. In the scene when his character saw the giant great white shark for the first time, this line fit in the story perfectly, so director Steven Spielberg chose to keep it. 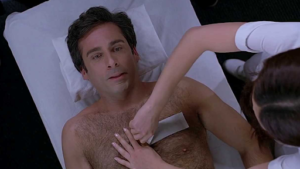 Actors do crazy things for a role, but we have to give tribute to the man who got his chest waxed on screen. Steve Carell’s first waxing experience was followed by swearwords, all of which came straight from his heart due to the pain. Yikes!

I hope you enjoyed this list and make sure to check out the movies with the most memorable endings too!